Finals are over. Not only did I survive another year of law school, I also survived a year of my bioethics masters program. So to treat myself, I obviously had to travel.

I’m very much a beachy person. First choice definitely is somewhere in the Caribbean or the Mediterranean. But beach town was just not in my finances. Want to know what was though? Crashing with my sister and her 2 roommates* in a one bedroom for a week while she was studying abroad in London.

Sad thing was? Sis was in the midst of finals. So, you’re going to get a lot of mediocre quality pics of everything except for me. Too bad I didn’t bring a selfie sick. Too bad I also didn’t trust people to take picturesque pictures of me. I miss my Cleveland food crew taking the greatest pics.

Anyways! I spent my first two days in London just sleeping. I was exhausted from finals and jet lagged. But once I started getting up, that’s when the exploring came in.

I really didn’t care much for exploring London places and sightseeing. I’m not a huge UK history person. I enjoy Italian, French, Spanish, and Greek history though… And Catholic history. I just wanted to walk around, find food places, drink craft beers and ciders, and chill, chill, chill. What I didn’t do? Drink lots of craft ciders.

So you’re going to get lots of food pictures and lots of random pics from around London.

33 walking miles over the course of 5 days. Enjoy! Every Tuesday, I’ll add greater details and photos for each location in a separate post. So stay tuned! And don’t worry… I’ll keep you updated every week.

Izakaya by Sushi and Robata: 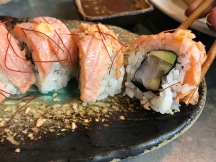 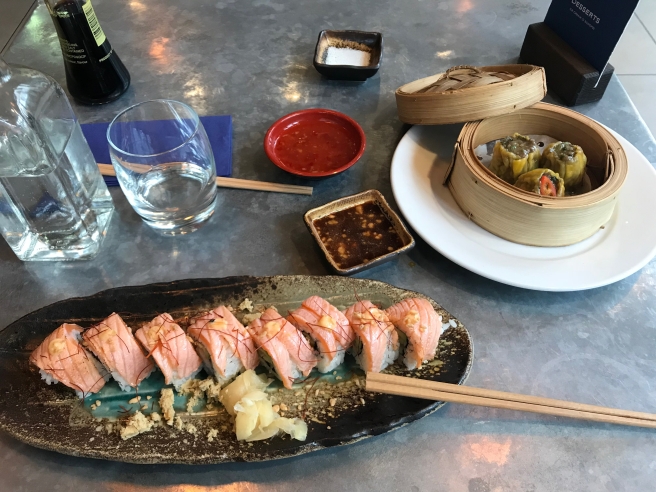 Cute and quaint Japanese pub located right above the Whole Foods in Kensington. Sushi was great, but the dumplings were phenomenal. Really wish I had more of the dumplings. Only regret? Not getting a signature cocktail and some dessert.

I could probably be vegan if I lived in London, at least in Central London. I wasn’t planning on being vegan in London, but I did try to be vegan as often as I could. Most places had sustainable vegan options, and for that, I applaud them. But Leon caught my eye, so I decided to give it a try. The meatless meatballs? Very good. Although, I think I’m slightly allergic to eggplants. 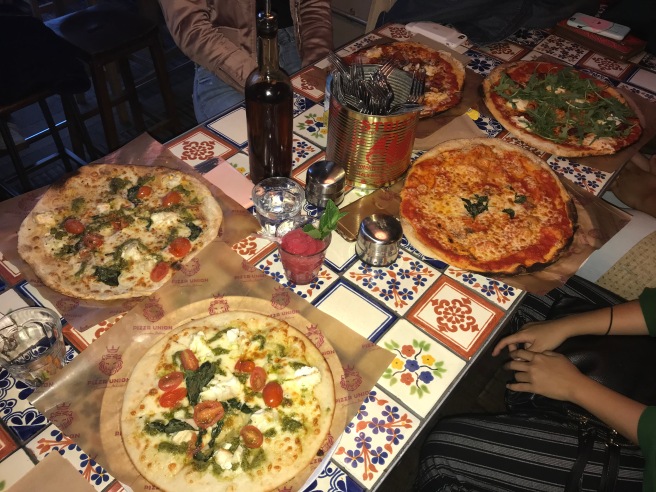 So my sister said that London is not good for pizza. I’m inclined to believe her. I didn’t hate Pizza Union, I actually enjoyed it. The gluten-free dough sucked, but I’m glad they had the option. The goat cheese and tomato combo was great, as per usual. And sprinkled the pizza with spicy oil and basil, which did give it some flavor.

The raspberry mojito though? Great. Too bad it wasn’t on the rocks instead of frozen. 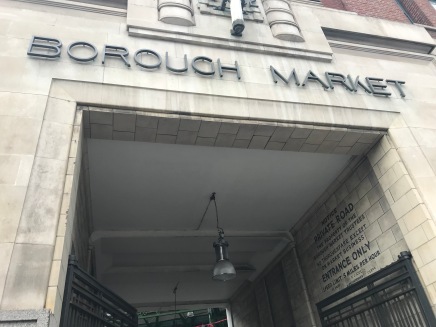 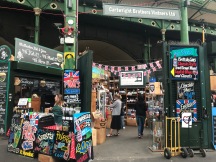 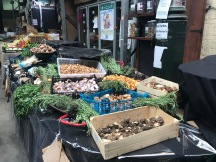 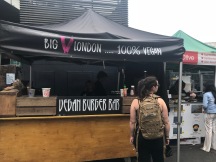 My sister said to check out this place. And I loved it. I LOVE markets. This reminds me of the West Side Market in Ohio City, Ohio. Lots of vendors setting up shop to sell you their goodies. It’s a farmer’s market… but cooler? More urban, if that makes sense. Honestly, if I lived in the area, I would probably come here at least once a week, even if just to grab some of the street vendor foods. 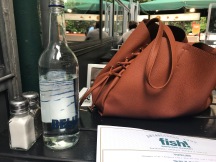 Okay, so, they had a sign outside saying that they won several awards for best restaurants. Obviously, I HAD to try it, for the blog of course. Stupid me confused the street vendor for the restaurant. The vendor (still part of Fish!) sells actual fish and chips. The restaurant serves higher end plates. I tried out a new dish: deviled whitebait, and I am a fan.

I didn’t take the history tour or lesson, so enjoy the pictures. Also… didn’t realize the River Thames was so mucky. Shoutout to the two girls who saw me struggling with my selfie and decided to take a picture of me. That was the first day (of the rest of the week, ugh) I experienced the London cloudy and rainy temperature. 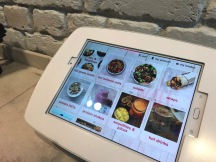 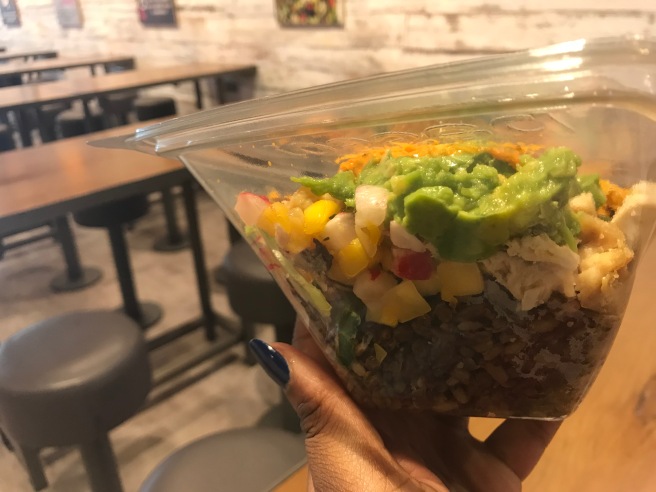 Like I said: Easy to be vegan here. I love the “technology” aspect of it. You place your order at one of the iPads, then you wait to pick it up. Took like 5 minutes. It’s like a salad place, but better. I would actually eat at Tossed at least once a week. Move over Chipotle.

I actually really want a Leon and Tossed near me…

All the high end restaurants and stores all located within walking distance? Thank goodness I’m personally broke and had no space because your girl would have been STRESS buying EVERYTHING. #TreatYoSelf #SelfCare. Ended up going to grab a late lunch at a burger joint and a speakeasy-esque basement lounge where happy hour is from noon to 9pm. Didn’t take pics. Sorry. 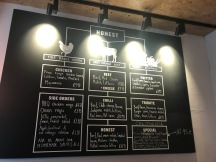 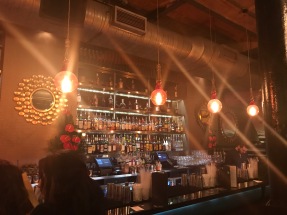 Who doesn’t like all day happy hour, £10 bottles of wine, and half-priced martinis? By the way, the hibiscus martini? Amazing. Sorry for crappy photos. My phone did not like the dark lighting? I just really enjoy the picture of me… 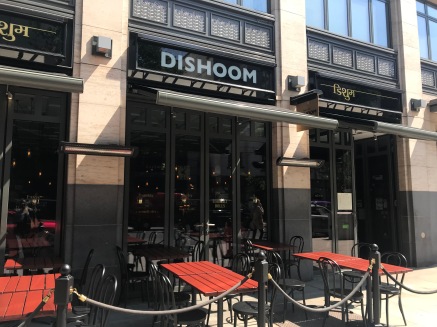 By far, my favorite (and priciest hahaha) restaurant in London. Always packed–I’m honestly surprised I was able to find an open spot without a reservation during peak lunch hours. The food was meant to be shared, but the person who I went with wanted to get his own plates instead of ordering a lot and splitting it. Regardless, my food was bomb. And kachumber is now probably my new favorite side.

Overall, London, you’ll be missed. But also, not really. Managed to get a sinus infection and an upper respiratory infection. BUT I’ll catch ya when another one of my friends are staying in London. Maybe next time, I’ll check out more of the nightlife.

Oh, I also got lost in London. Took a bus to Shoreditch, ended up napping, ended up in Zone 6 of London. Woke up confused as heck. Since the buses don’t loop, I had to get out and find the next bus stop. Then I had to trek all the way back to Shoreditch, only to be severely underwhelmed when getting off the bus in Shoreditch. So just walked the 2 miles back to my sister’s and drank some cider and went to sleep.

Tired of the food? Feel free to check out my other random pics of London:

*These roommates were the coolest people EVER. They also asked me to talk about them. But they legitimately were some of the chillest people, especially because they let me stay in their one bedroom, me sleeping on their floor, for a whole ass week. That’s cool.